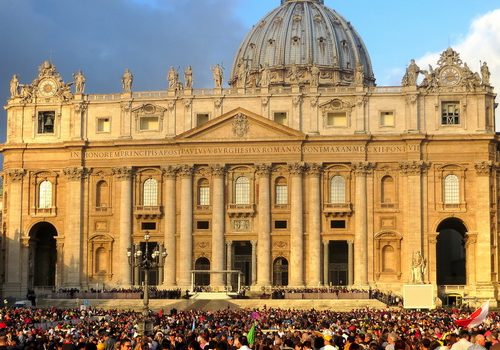 Join The Southern Cross and Radio Veritas on this very special pilgrimage to the shrines of the SAINTS OF ITALY in Rome, Assisi, Venice, Padua, Siena, Florence, and more. WITH PAPAL AUDIENCE!

Saturday, May 6, 2023
We meet at OR Tambo International in Johannesburg to depart for our journey to Italy.

Sunday, May 7
After arrival in Rome we proceed to the Basilica of St Paul Outside the Walls where we visit the tomb of St Paul the Apostle, with the reputed prison chains of St Paul. We then go on the ancient Appian Way to visit the Catacombs where early Christians buried their dead and held their forbidden services to escape persecution. We then check into our hotel and have the rest of the day at our leisure. Overnight: Rome

Monday, May 8
Today we explore ancient and baroque Rome. We visit the Pantheon, the imposing 2nd-century structure that once was pagan temple and since 609 AD is a Catholic church, make a photo stop outside the Colosseum and survey the Roman Forum. We visit the Trevi Fountain, Piazza Navona and the Spanish Steps, among other great sights. In the Church of Santa Maria sopra Minerva we visit the tomb of St Catherine of Siena, whom we’ll encounter again on Friday, and see a statue of Christ by Michelangelo. The famous Renaissance painter Fra Angelico is also buried in this church. We also visit the Church of Sant’Ignazio, with its stunning interior and the tombs of St Robert Bellarmine, a Doctor of the Church, and St Aloysius of Gonzaga. Overnight: Rome

Tuesday, May 9
The day of the other three major basilicas. We visit St Peter’s Square in the Vatican and enjoy an expertly guided tour of St Peter’s Basilica, which was built on the site where St Peter was martyred. The basilica is full of tombs of saintly popes, including those St John Paul II, St John XXIII, St Pius X and St Paul VI. St Mary Major Basilica is dedicated to the greatest of all the saints: Our Lady. Pope Francis has a special devotion to the statue of Mary Salus Populi Romani in the basilica. In St John Lateran Basilica, which is the pope’s cathedral as Bishop of Rome, there are many papal tombs, including that of Pope Leo XIII. Nearby we see the Holy Stairs, which are said to be those walked by Jesus at his trial before Pontius Pilate. We also visit the Gesù Church, the mother church of the Jesuits, with the tomb of St Ignatius of Loyola Overnight: Rome

Wednesday, May 10
Today we see Pope Francis at the general audience in St Peter’s Square (subject to the Holy Father being in Rome). It is an unforgettable experience to see the pope close-up. We have some free time before we proceed to Assisi, the town St Francis and St Clare. Overnight: Assisi

Thursday, May 11
Today we explore Assisi, the town of St Francis of Assisi and his companion St Clare. The 13th-century Basilica of St Francis contains the tomb of Francis as well of famous Franciscans such as St Bonaventure and St Rufino. Also see Giotto’s beautiful frescoes of St Francis’ life. St Clare Basilica, also from the 13th century, houses the relics of St Clare of Assisi, original robes that belonged to her and St Francis, as well as the miraculous crucifix that spoke to Francis.

In the afternoon, we visit the Eremo delle Carceri: in the caves on the slope of Mount Subasio just outside the walls of Assisi, St Francis and his followers established their first home at the Carceri Hermitage. He often returned here during his life to pray. At San Damiano Convent St Francis first received his miraculous calling in 1205. St Clare died there in 1253 — it is an important stop on our pilgrimage to the Franciscan holy city.

Friday, May 12
After breakfast we depart for Siena. Located in the central region of Tuscany, this is the birthplace of St Catherine of Siena (1347-80), who with St Francis of Assisi is the patron saint of Italy. Her relics are in the Church of San Domenico. Our guided city tour of the medieval town includes a visit of the famous Piazza del Campo — known for the Palio, horse race in medieval costume — the Duomo (Cathedral), which is famous for its frescos and floor mosaics, and the home of St Catherine.

We then continue to San Gimignano, one of the best-preserved medieval towns in Tuscany. The UNESCO World Heritage Site is well-known for its tall towers and called the “Medieval Manhattan”. The town is the birthplace of St Serafina, who was born there in 1238. Overnight: Florence

Saturday, May 13
Today we explore the great city of Florence, starting with the famous Basilica of Santa Maria del Fiore (the Duomo), the cathedral of Florence with its great representation of Tuscan Gothic architecture. It includes the resting place of the 13th-century artist Giotto, whose great murals we saw in Assisi’s basilica. The Basilica of Santa Croce (Holy Cross Basilica), the largest and most beautiful of all Italian Franciscan churches, contains the tombs of Michelangelo, Galileo, the composer Rossini, among others. We will cross the famous 14th-century Ponte Vecchio (Old Bridge) with its array of shops, and see an original-size replica of Michelangelo’s David amid many original sculptures in the majestic Piazza della Signoria. Overnight: Florence

Sunday, May 14
After breakfast we drive through the beautiful Italian countryside to Padua, the city of one of the world’s most beloved saints: St Anthony of Padua. His impressive tomb is in the impressive basilica complex which also houses relics of the 13th-century saint and famous works of art. We have Mass in the Basilica of San Antonio. We explore the city, which has one of the world’s oldest universities whose students congregate on the many piazzas, at leisure. Overnight: Padua

Monday, May 15
Today we see Venice, the city where everything and everyone floats! This lovely lagoon-city on the Adriatic coast is like a giant maze with tiny alleys and hidden piazzas linked by narrow foot bridges over 400 large and small canals. It is with good reason that Venetians call their city “La Serenissima” (the most serene). We arrive by boat in St Mark’s Square to visit St Mark’s Basilica, a masterpiece of Venetian-Byzantine architecture built in 830 to shelter the tomb of St Mark the Evangelist. We have Mass in the great basilica. We see the marble Ducal Palace, and the famous “Bridge of Sighs”.
Venice is best explored on foot, and we have the afternoon at our leisure to do so. You might take an optional Gondola ride across the Grand Canal or walk on the Rialto Bridge and visit the market. If you love churches, Venice has many of them, including one where the Venetian composer Vivaldi was baptised. To experience the real Venice head towards the side streets to “Strada Nova” to see how Venice’s citizens live and shop. We then take the boat to Tronchetto Terminal from where our bus will take us to the airport for our trip home.

Tuesday, May 16
We arrive in Johannesburg in the morning, tired but fortified by our holy journey which brought us in contact with great saints through whose intercession we brought before God in prayer so many of our intentions. 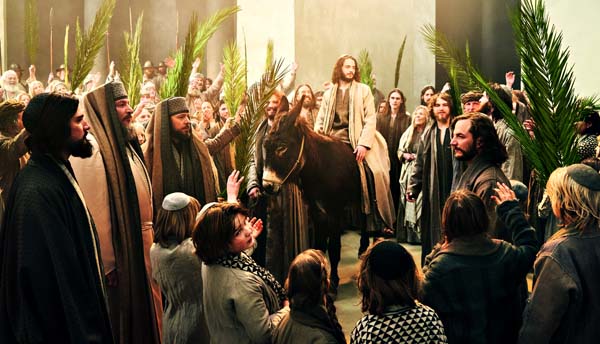 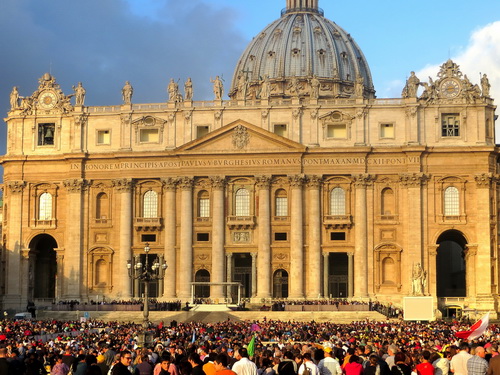 • Father Russell Pollitt SJ •  6 - 16 May 2023 Join The Southern Cross and Radio Veritas on this very special pilgrimage to the shrines of the SAINTS OF... 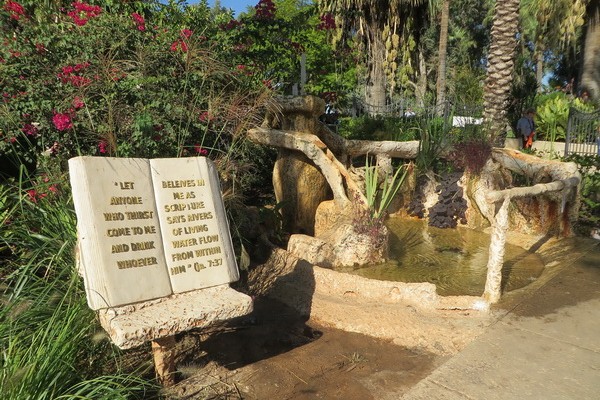 Led by Frs Christopher Slater & Peter Whitehead • 2 to 11 July 2023 The East London Deanery invites you to join this special pilgrimage to the Holy Land.  ... 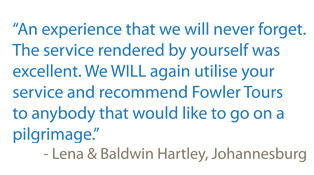 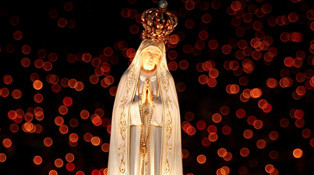 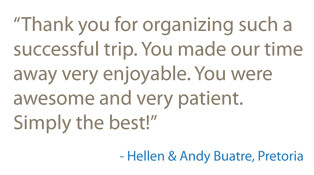